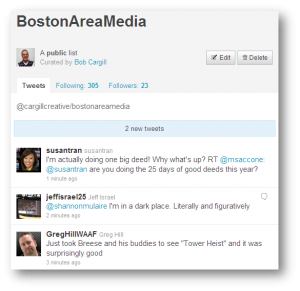 I’m a news junkie. I admit it. I can’t go much more than a few hours without a fix of the latest headlines.

The weather forecast is important to me. If there’s been a crime committed, a notable death, an accident, a fire or any tragedy or disaster whatsoever, I like to know about it. I’m a huge sports fan. Celebrity gossip amuses me. Significant milestones and achievements impress me. I’m entertained by pop culture and fascinated by anything to do with business or politics.

And if any of this news is local, I find it even more interesting.

That’s why I spend so much time listening to the radio, watching TV and reading articles on such online properties as Boston.com, BostonHerald.com, Sudbury Patch and Wicked Local Sudbury. And that’s one of the reasons why I like Twitter so much. In fact, more often than not, I find myself using Twitter either exclusively or in tandem with traditional media to stay informed.

And one of the first places I turn to on Twitter is a list I’ve created there that’s comprised of Boston-area media accounts. Multiple times a day, I take a look at this list via my smartphone or laptop. In no time at all, I can scan the latest tweets from the more than 300 accounts on this list to make sure I’m not missing out on any important news, opinions, developments and issues. This is a great way for me to keep up with what’s going on without having to follow an inordinate number of the Twitter accounts on this list individually. I’ve even gone so far as to turn this list into a separate column on TweetDeck, a popular desktop application which I use to access Twitter from my laptop, which makes it even easier to follow at a glance.

With this Twitter list at my disposal, I know that I’m in the loop on pretty much anything and everything that’s happening out there – from Sudbury to Boston, throughout the country and all around the world.

Thanks to this steady stream of tweets from newspaper writers such as Scott Kirsner and Ian R. Rapoport, TV news reporters like Susan Tran and Mike Beaudet and radio talk show hosts such as Michael Holley and Mel Robbins (just to name a few of those on my list), I’m not only being kept well-informed, I’m actually getting to know a little more about these folks than their professional personas might typically reveal in print or on air.

After all, as I wrote in a blog post a few months ago…

“From print journalists to TV news reporters, disc jockeys to talk show hosts, almost everyone on the local media scene is using Twitter nowadays to forge deeper relationships with their readers, viewers and listeners. That’s not to say they’re not promoting their own work via this increasingly popular social media platform. But they’re also winning favor among their constituency for being surprisingly approachable and responsive, giving time and attention to as many of their followers as possible.” 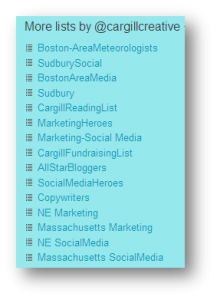 Of course, you can create your own list on Twitter and do the same thing yourself. Or you can click here and just follow the list of Boston-area media accounts on Twitter I’ve already curated for you. It’s your choice. But whatever you do, don’t underestimate the value of keeping up with the news as it happens – or any other topic you can imagine, by the way – by following such a list on Twitter.